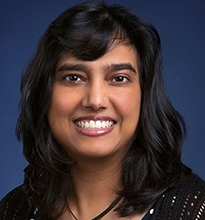 Finding funding for a new business venture can be challenging under any circumstance, but underrepresented groups such as women and people of color often face additional hurdles.

Rashmi Menon, Entrepreneur-in-Residence at the University of Michigan Ross School of Business, discusses barriers to entrepreneurship and how venture capital can become more inclusive. She moderates a virtual panel discussion March 26 with entrepreneurs and venture capitalists working to expand equity as part of the Ross School Lecture series economy and society.

A critical aspect of entrepreneurship is finding finance. You mentioned that less than 3% of venture capital funding has gone to Black and Latinx founders over the past five years. Are there other statistics that show the extent of the problem?

In 2018, startups founded by women received less than 2% of all venture funding. If you look at women of color, it’s actually 0.2%. Other stats cover the trillions of dollars under management – everything from VC funds to private equity and other financings. Only about 1.3% of these funds are controlled by women-owned companies. And those stats are just as disproportionate when you look at other underrepresented groups.

You pointed out that finding funding is perhaps the most obvious obstacle, but there are many others. What are some examples?

Yes, there is so much more than funding barriers to entrepreneurship. A recent study of entrepreneurship in Israel found that the most important factor in an entrepreneur’s success was the wealth of the founder’s parents. If your parents are wealthier, you likely went to better schools, you have a better network, you have more access to mentors, you have better access to prestigious career and educational opportunities.

Then, after graduation, we have a bunch of students who are very passionate about starting a business but just can’t afford it because they need to earn an income to pay off their student loans or they may be losing their income have to spend to support other family members. In addition, Jeff Bezos, for example, received a significant amount of money from his parents to start Amazon.

Underrepresented groups in entrepreneurship can often rely less on family than capital to start their business.

What are some of the broader societal barriers?

When we look at how entrepreneurs are portrayed in the media and academic literature, we typically have an image of a straight, cisgender, white male who is typically upper-middle class. Entrepreneurship gets a lot of coverage these days, but who gets the majority of it? Elon Musk, Jeff Bezos, Bill Gates, Mark Zuckerberg. We have the same problem when we look at the academic world: who is being brought in as a guest speaker? Who is taught as a case study example in a class?

The result, I think, is that there is a lot of self-selection going on. I think people from underrepresented groups don’t necessarily see themselves as people who could be entrepreneurs because when they read about entrepreneurs, those people aren’t like them, and that happens all the time.

As a result, a person from an underrepresented group often does not choose this starting path. They don’t take the entrepreneurship classes, they don’t do the Zell Lurie Institute programs, because they’ve been conditioned to believe “this isn’t for me.” Once a woman literally walked into my office and said, “I don’t know if I really deserve to be an entrepreneur.” It broke my heart.

What are some things that should be done to address these issues?

We need to make the range as wide as possible. Part of what we need is for people to understand that this is something anyone can do.

On the academic side, it would be nice if universities focused more on that. If guest speakers come to class, make sure they’re from a diverse group of people so we don’t keep seeing the same type of person as a model for success.

The problems after graduation are more complex. What if a fund was set up so graduates could spend a year working on a startup idea that would allow them to spend that year getting their business off the ground? Or maybe a student loan waiver could help people who choose to start a business after graduation.

There are now more and more funds that specifically focus on funding underrepresented groups and I think that’s fantastic. But it’s still a trickle. It’s still a very small percentage. We could use more of that.

Finally, it can also help to broaden the definition of entrepreneurship and provide resources for multiple entrepreneurial avenues. Much of the media coverage and funding tends to go to high-growth, venture capital-backed startups, which typically take millions of dollars and many years to get off the ground.

But entrepreneurship comes in many forms, including businesses that are relatively self-sustaining or can be run as a side hustle. Increasing resources (e.g. mentoring and funding) and media and case study coverage of these types of companies could also expand opportunities for entrepreneurs from different backgrounds.

What do you hope will participants learn or benefit from the upcoming panel discussion you are moderating?

I want people to understand what career paths look like for entrepreneurs, especially entrepreneurs from different backgrounds. I think it will be interesting to hear what challenges these entrepreneurs face, both because of the group they come from and in general as entrepreneurship is a difficult career path. And hopefully we’ll hear a little bit about how they overcame those challenges.